A new, collaborative series of double-bill performances showcasing local Emerging Creators and a line up of diverse voices & artistic expression.

Our new Rehearsal Hall Series is a set of five double-bill performances that showcase an incredible group of Emerging Creators, combining diverse visual and performing arts, cultural backgrounds, and forms of expression. Led by our Youth Engagement & Performing Arts Assistant, Valentina Acevedo Montilla, we’ve invited six up-and-coming local performers and curators to headline each show and program their own opening act. The result is an eclectic mix of sounds, ideas and people that thrive on their differences and evolve by collaborating and imagining more hopeful futures.

We have worked hard to turn our Rehearsal Hall into a safe space for you to reconnect with the arts. Our ‘cabaret-style’ seating arrangement will help us ensure proper physical distancing between our patrons, and our facility is fully sanitised before and after all events. We hope these changes, supported by our dedicated Facility Safety Plan, will keep you confident in our ability to ensure your safety while you support local emerging creators in BC.

Have a slightly bigger bubble? Tables for 2 at our Rehearsal Hall Sessions will have the option to purchase additional seats (max. 2) to their table. To add additional seats to your table, please contact our Box Office: 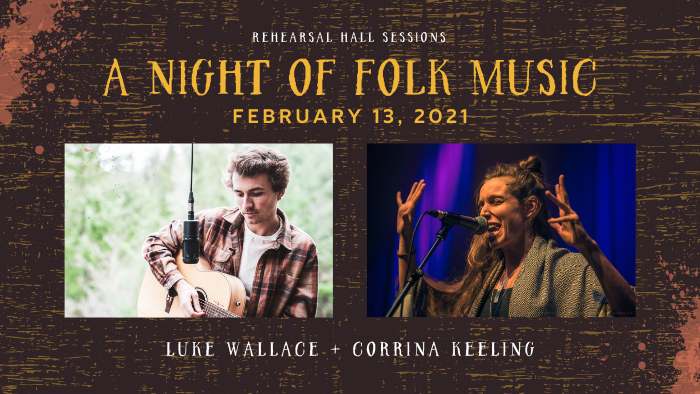 This special performance features a new wave of politically conscious Folk music that is quickly becoming the soundtrack for a movement of people rising to meet the social and environmental challenges of our times. First up, Corrina Keeling, a Vancouver sidewalk chalk revolutionary, graphic recorder extraordinaire, and maker of music will take the stage to move you. Corrina will be followed by local singer-songwriter and activist Luke Wallace, who you can find collaborating with local Indigenous communities along the West Coast, leading rally-sing-a-longs at Canada’s Youth Climate Marches, and organising innovative concerts to fundraise for causes close to his heart. Inspired by some of the hope and anger of their generation, join us for a night of Folk Music filled with sweet sounds and irresistible songs which will have you dancing in your seat. 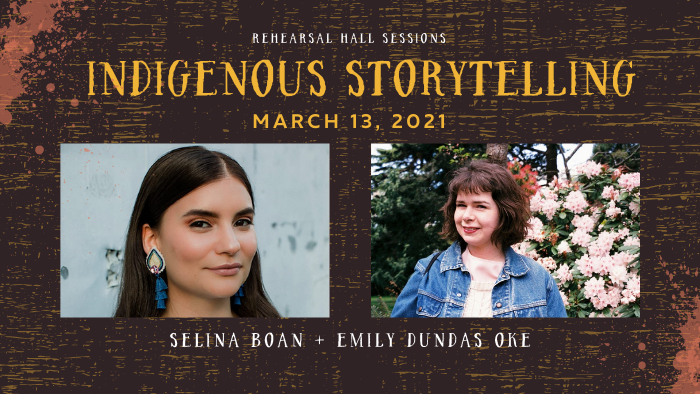 For this very special performance, gather with us to celebrate and uplift the voices of emerging Indigenous poets, writers, and storytellers. Join us for an amazing evening of storytelling co-curated by Selina Boan, Winner of the 2017 National Magazine Award for Poetry and the 2018 Room Magazine’s Emerging Writer Award. Joining Selina is Emily Dundas Oke, an emerging curator and interdisciplinary artist, alumni of the TRU Indigenous Knowledge Makers program, and co-organizer of the Indigenous Brilliance reading and performance series. We are extremely excited to welcome these engaged and thoughtful artists to our stage. 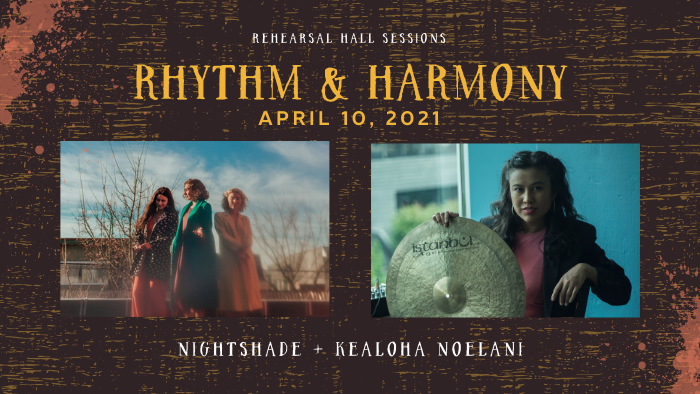 Join us for the bright and beautiful music of KeAloha Noelani, a musician and dancer from Llheidli T’enneh territory. Recently, KeAloha has been cultivating her voice, words, and stories to bring her latest project to life. Her music is inspired by Hawaiian and Latinx music, Pop, R&B, Neo-Soul, and Folk. Closing this fabulous evening of Harmony & Rhythm, prepare to be enchanted by the sweet sounds of Nightshade, featuring the musical talents of Olivia Shaw, Maya Graves, and Katie Miles. These ladies, who have been playing together since 2015, believe in and celebrate the power of music to bring wellness, joy, healing, and education to people through their three-part vocal harmonies that uplift them all as collective singers. 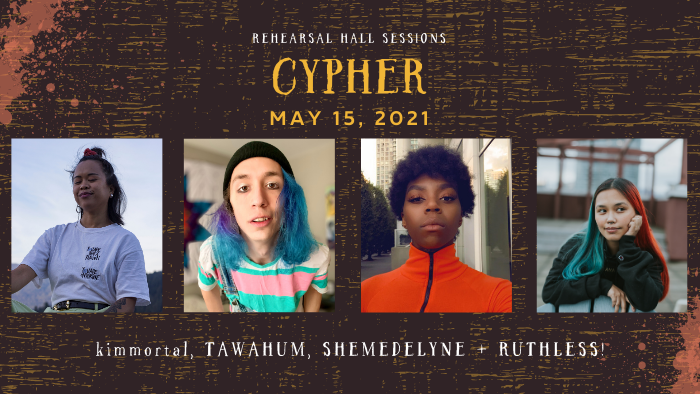 We are incredibly excited to welcome kimmortal to our Rehearsal Hall Stage, where they have curated a sensational lineup of up-and-coming QTBIPOC artists which will all be accompanied by a keyboardist. Opening the evening’s line up is Shemedelyne, a Vancouver-based emerging poet and singer-songwriter from Port au Prince, Haiti. Shemedelyne believes that music allows us to be our most authentic selves, and fills us with hope and opportunities. She will be followed by RUTHLESS!, a Filipinx writer and poet based on the stolen territories of the Katzie, Semiahmoo, Kwantlen, Kwikwetlem,   Qayqayt, and Tsawwassen First Nations. Next up, Tawahum, a Łutselkʼe Dene, Plains Cree poet will close our opening line up. Tawahum’s poems expose their growth, resistance, and persistence as a hopeless Two Spirit, Nonbinary person on occupied Turtle Island. To close the night, audiences will get to experience kimmortal’s music, who intertwines themes of queerness, identity, and oppression with a heavy influence of rap, soul, and spoken word. 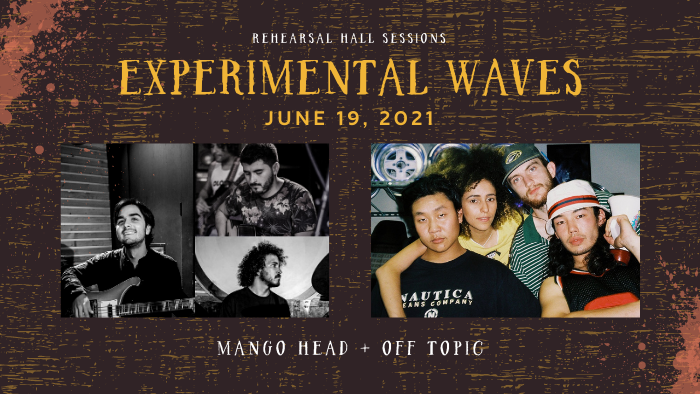 To close our first ever Rehearsal Hall Sessions, prepare to be wowed by some Experimental Waves! The evening begins an eclectic mix of grooves from Off Topic, a local Hip-Hop crew from Vancouver BC with a unique blend between old-school boombap, soul, and jazz. Off Topic is formed by Yian Kim, producer Will Moriarty, TK Tha Soul Child, and Bby Booda. Then, closing the night is Mango Head, an experimental Latin Jazz group from the underground scene of East Van. Mango Head is an improvisational group made up of resident musicians from the alternative collective Experimental Waves, formed in 2017. Mango Head is formed by Daniel Hernández-Pinto and Alan Ruiz from Colombia, and Alonso Benavente from Peru/Ecuador.

LOOKING FOR MORE DIVERSE PROGRAMMING?
CHECK OUT OUR SWING SESSIONS!

The Swing Sessions are a shift from our usual programming to invite our audiences to try something new + enjoy the smooth rhythms of Afro-Soul and R&B. Join us for a new series featuring emerging, BIPOC artists whose musical influences carry generations of sound. Re-connect with the arts this spring through the percussion of drums and guitars from the Latin American Coasts of Colombia and El Salvador. All Swing Session tables are also on sale!

These new Swing Sessions are the first in a new line of youth-focused programs to inspire the “Flaming Youth” of the 2020’s to get together in a safe + accessible way, where everyone is welcome and the unbelievable talent of BC’s BIPOC artists are celebrated as an integral part of our arts & culture community. Don’t wait to grab your tables – we have a feeling this exciting addition to our Spring Sessions are going to sell out fast! 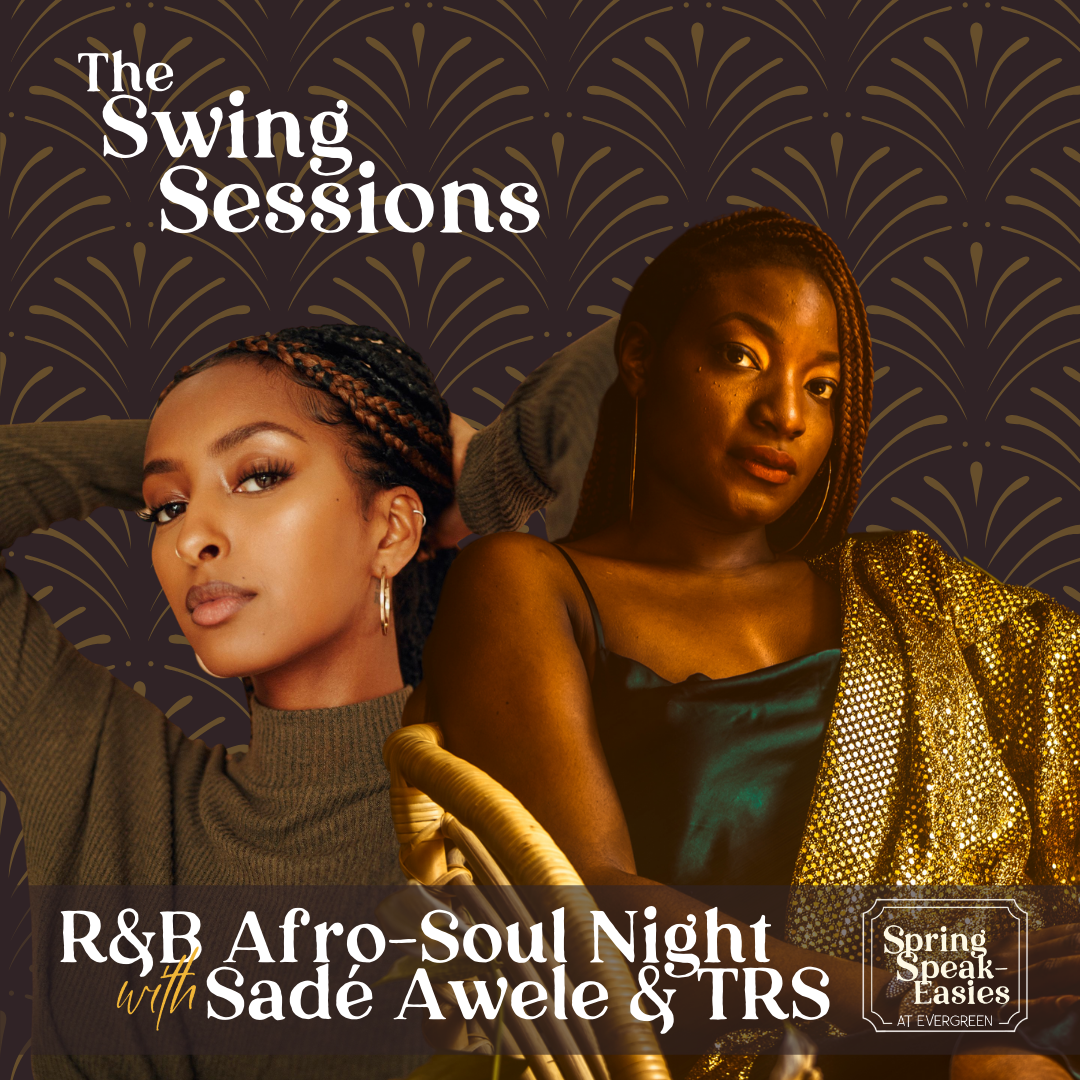 Headliner: Sadé Awele is a Nigerian-born singer who is inspired by her Yoruba and Ibo heritage, which you experience in her music, one that ranges from afro-soul to conscious alternative R&B, neo-soul and contemporary R&B. Her music is certainly in a category of its own. Described by Exclaim! Media as an artist that needs to be heard in 2020, Sadé is the afro infused R&B artist you’ve been waiting for. Having won AFAM’s female artist of the year award, she has captivated spaces with her timeless lyrics and jazzy tone. She writes and performs any genre she likes without setting any boundary, relying on her emotions and intuitions.

Opening Act: TRS is an Ethiopian-Canadian artist born and raised in Vancouver BC. She has been musical in nature her whole life, and began to explore her voice, instruments, and songwriting from a very young age. She began performing as a solo artist by playing at Fortune Sound Club in 2019, and Her style often alludes to elements of the hip hop, soul and R&B classics that came before her, including sounds from the likes of Lauryn Hill, D’angelo, Aaliyah, Timbaland, J Dilla, and Sade. With her rich tone and smooth delivery paired with expressive and raw storytelling spanning love, loss, and everything in between, her music is made to make you feel. 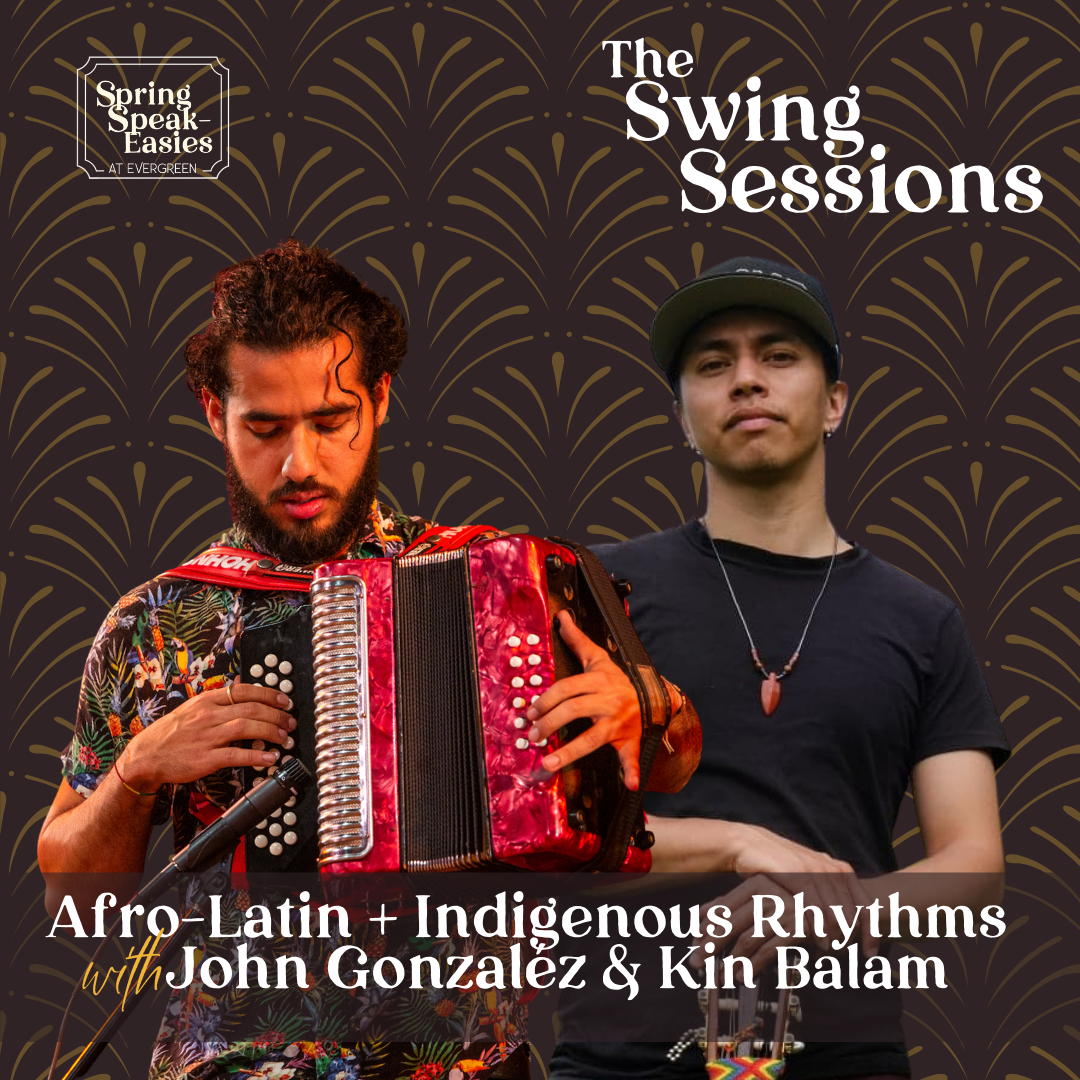 Headliner: John González  is a Colombian-Canadian accordion player, hand percussion player and teacher who specializes in Cumbia & Vallenato. He started playing the accordion when he was 10 years-old; his particular style of playing is heavily influenced by his teachers, travel, and broad cultural experiences.

He is also a community organizer of cultural events, where people from different cultures enjoy the diversity of dance and music, both Indigenous and contemporary.  He performs regularly around Vancouver and the Islands with his band Breaking Boundaries. Through the accordion John expresses the sounds of sacred chants, the Colombian accordion tradition and the sounds of two native indigenous flutes (Millo and  Gaita) accompanied by a strong percussion element.

Opening Act: Kin Balam (Balam Axayacatl S. Antonio) is a  Salvadorian-Canadian of Pipil Lenca Nahua heritage, guitar player, percussionist, singer, and composer. He started playing music at the age of three, using a drum stick to follow the tempo to all the different music that his family shared to him. One of the first styles that called his attention was Cumbia music, and he also studied classical guitar, trio music, and Afro-Latin rhythms on the congas.

His musical project, Kin Balam, or Path of the Jaguar, portrays the struggles, beauty, history and warrior spirit of his journey in music and through life. His biggest inspirations before his 20’s  were Jimi Hendrix, Carlos Santana, Silvio Rodriguez. After his 20’s, he dedicated mainly to rap before coming back to the guitar to focus on flamenco music and to the study of his native Indigenous traditions from El Salvador, which involves the creation of native instruments.