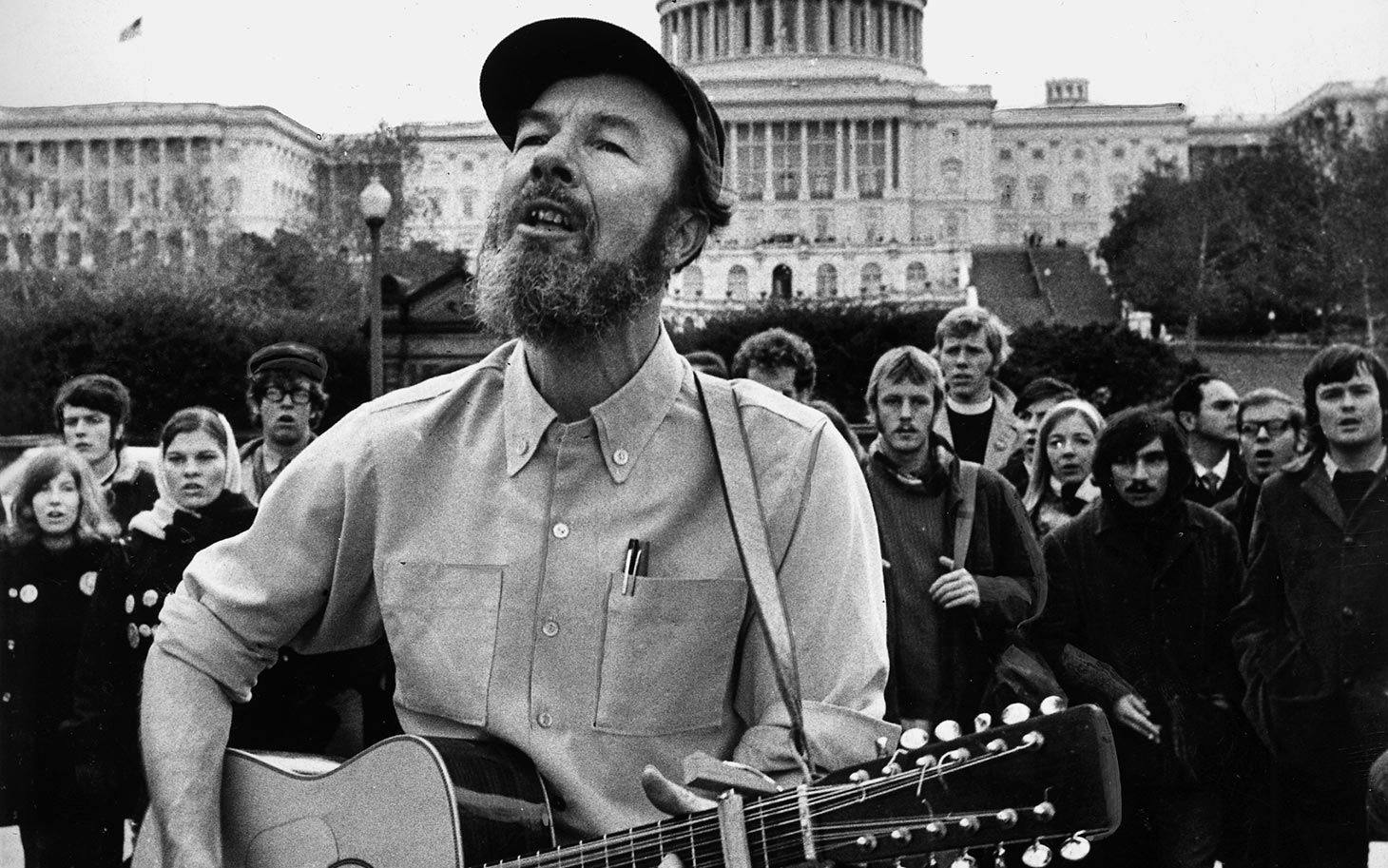 Pete Seeger had an upbringing steeped in music. His father, Charles, taught music at the University of California, Berkeley and his mother, Constance de Clyver Edson Seeger, was a concert violinist. His half-sister, Peggy, would become an eminent folk musician alongside Ewan McColl, and his half-brother Mike Seeger also became a folk singer.

Seeger, who has died at the age of 94, received a Grammy Lifetime Achievement Award and a National Medal of Arts, and, in 1996, he was inducted into the Rock and Roll Hall of Fame. When Seeger’s 90th birthday was celebrated, Bruce Springsteen hailed him as “a living archive of America’s music and conscience, a testament of the power of song and culture to nudge history along.”

Continuing our spotlight on Pete Seeger and his life’s work as an artist and activist, today’s blog post comes to you filled with lots of songs and perhaps a few stories. While listening to many of his songs to prepare for this post, I was surprised that I knew so much of his work. So, without any hesitation, or bias for my favourites, here is a list of 7 that I think you’ll enjoy too!

1) We Shall Overcome
Becoming a key song in the civil rights movement in the Sixties, We Shall Overcome has complex roots. Seeger (along with Frank Hamilton and Guy Carawan) adapted their version from several old gospel songs and a hymn, I’ll Overcome, which had been sung by striking tobacco workers in South Carolina. They copyrighted their version and dictated that all of the song’s royalties went to the “We Shall Overcome” Fund, administered by what is now the Highlander Research and Education Centre.

Seeger once said: “Nobody knows exactly who wrote the original. The original was faster.”

In August 1963, Joan Baez led a crowd of more than a quarter of a million people in singing We Shall Overcome at the Lincoln Memorial, during the famous March on Washington.

2) My Rainbow Race
Pete Seeger wrote My Rainbow Race as a children’s folk song in 1973. The song was a hit in the Seventies in Norway and came to prominence there again in 2012 when it was sung by a crowd of more than 40,000 people as a protest against statements by mass murderer Anders Behring Breivik.

3) Where Have All The Flowers Gone?
A song Pete Seeger originally wrote in 1955 and to which additional verses were added by a teacher called Joe Hickerson in 1960. Seeger gave him 20 per cent of the royalties. Where Have All the Flowers Gone? was inducted into the Grammy Hall of Fame in 2002. Seeger recalled about the song: “I had been reading a long novel – And Quiet Flows the Don – about the Don River in Russia and the Cossacks who lived along it in the 19th century. It describes the Cossack soldiers galloping off to join the Tsar’s army, singing as they go. Three lines from a song are quoted in the book: ‘Where are the flowers?/The girls plucked them/Where are the girls?/They’re all married/Where are the men?/They’re all in the army.’ I never got around to looking up the song, but I wrote down those three lines. Later, in an airplane, I was dozing, and it occurred to me that the line “long time passing” – which I had also written in a notebook – would sing well. Then I thought, ‘When will we ever learn’. Suddenly, within 20 minutes, I had a song.”

4) Oh, Had I A Golden Thread
The song was written by Pete Seeger in 1958 and is often mistaken for a traditional song. Eva Cassidy said it was her favourite song and recorded a live version. Seeger said: “A rather gentle song came to me as I was fooling around on the guitar. Years later I realised that I had rewritten the melody of ‘Nearer My God to Thee.’ Once again, you can see how the folk process has been aided by a bad memory.” (This song is one of my favourites of his, it really talks about the connecting people across the world with positivity)

5) Turn, Turn, Turn
The Byrds has a No1 hit in 1965 with Pete Seeger’s beautiful song Turn! Turn! Turn!, which is adapted from a passage from chapter three of the Book of Ecclesiastes. The song includes the lines: “To every thing there is a season, and a time to every purpose under the heaven.” Seeger said he had remained an optimistic person throughout his life, saying in 1994, “The key to the future of the world is finding the optimistic stories and letting them be known.”

7) Wimoweh
Pete Seeger was a master at reinterpreting old spiritual and protest songs. With Wimoweh, which Seeger sang and adapted with The Weavers, he took a South African song written and recorded by Solomon Linda (the title was Seeger’s mishearing of Mbube) and turned it into a modern folk classic. You’ll recognize the song’s repetition in the much more recent song “The Lion Sleeps Tonight.”

To learn more about Pete Seeger’s life, join us for the documentary PETE SEEGER: THE POWER OF SONGon September 20 at 2pm.